I recently got an urge to revisit old computer media from the late 90s and early 2000s. Growing up around that time, I remember reading a lot of MacAddict and MacWorld to learn what I could do with a Mac. Building websites, graphic design, hacking the appearance of the UI, all these were explained in the pages of magazines.

These magazines are freely available on the Internet Archive, including their cover discs. I was curious to see what applications were around back then — what about emulating Classic Mac OS to see? 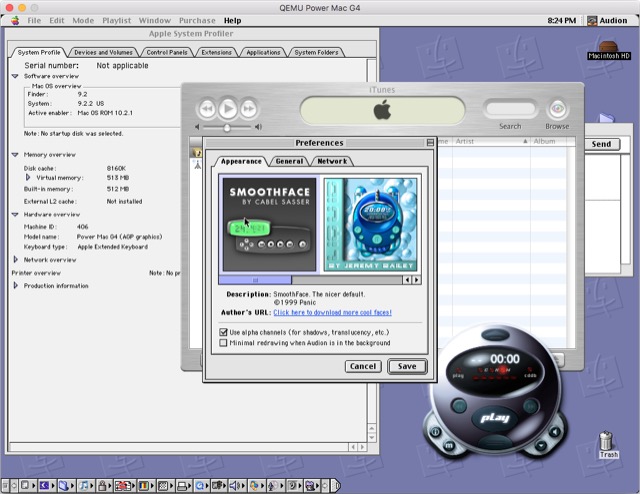 My first instinct was to reach for VirtualBox, but that is a no go as I need to emulate a Motorola 68K or IBM PowerPC architecture. I recalled that QEMU could emulate other architectures, surely someone has already tried to emulate Mac OS 9.

Yes, many people have already written about emulating Mac OS 9, but only recently (2018) did experimental audio support come out for QEMU. Here is a short guide on how I got it running with MacOS High Sierra as the Host OS.

Note that while QEMU is available in Homebrew, it does not have the experimental audio support (yet).

Magazines can be browsed right on the archive site, or downloaded as archives or PDFs (or a torrent containing all formats). Cover discs can be downloaded directly as ISO files or a torrent for the ISO. Don’t worry about seedless torrents; these ones are backed with web seeding.

DevTools: I already have homebrew and XCode installed; because of this I was not prompted for missing command line tools. If you don’t have them, you might be prompted (by MacOS) to install them.

Hardware: I am not sure about hardware requirements, as most modern Macs will probably eclipse the power needed to run the guest OS. However if you have a low-power CPU (e.g. MacBook) then there may be some struggling.

Windows/Linux: These instructions should probably work there too, although you will probably have to substitute something else for coreaudio in the configuration step.

These instructions are adapted from Cat_7 from the Emaculation forums

I started by creating a directory for all this emulation stuff.

Next clone the fork of QEMU with experimental audio support:

Then configure the source to use MacOS CoreAudio. I have also enabled LibUSB, KVM, HyperVirtualization Framework, and the Cocoa UI. In this case I am only compiling the emulator for PPC (32-bit).

Next use make to compile QEMU. (If you have more processor cores, use make -j 4 or however many cores to speed up the process.)

This will create a binary in qemu-screamer/ppc-softmmu/qemu-system-ppc that we can use.

Optionally you can install these binaries to /usr/local/bin or wherever. I kept them in the ~/emulation directory to separate them from the Homebrew QEMU binaries.

We will need to have a hard drive image for our guest OS. I made mine 5 GB in size, which would be typical at the time for Mac OS 9.

In our qemu-screamer directory, we will use qemu-img to create the disk image.

Get a Mac OS 9 Installer

If you have an ISO of a Mac OS 9 install disc (a Mac OS X classic install disc will not work — it must be bootable), then you can use that in the next step. If you don’t have one, you can download one from Mac OS 9 Lives: Mac OS 9.2.2 Universal Install.

The Mac OS 9 Lives method won’t install quite like an original Mac OS 9 installer would, but instead will use Apple System Restore to restore an image onto the hard drive.

Start up QEMU with the following options:

A breakdown of that command:

Once it starts up, you will be able to run Disk Initializer to format your hard drive image. Go ahead and do that, using Mac OS HFS Extended as the file system. One partition is good.

After initializing the disk, run Apple System Restore with the Mac OS 9 Lives disk image as the source and your disk as the destination. This will take a minute to restore. Once done, shut down the emulated system (Special Menu -> Shut Down).

Similar to the last command, except we start up from the disk we created.

It should boot up and you will have a running Mac OS 9 with audio! I recommend saving this command as a shell script in your ~/emulation directory. 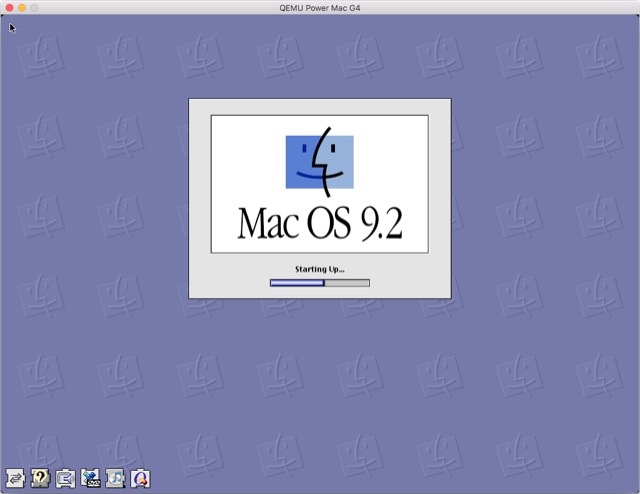 Boots much faster than it did in 2001

Backups: When the emulator is shut down, just make a copy of the hard disk image to create a backup. If something breaks your Mac OS 9 installation then you can restore the file.

Discs: You can dynamically attach CDs/DVDs to the emulated system by going to the menu bar on your host system for the QEMU application and selecting the option to attach to the CD IDE drive. It will open a dialog letting you select your ISO.

Compatibility: This is emulating Mac OS 9.2.2, released in late 2001. The emulated hardware is more or less of the same vintage, meaning software from the mid-to-late 90s will have some trouble running (as I found). The most common problem is not being able to drop down to 256 colours, although I later found a solution (link below). I have not tried emulating Mac OS 8/8.5; a cursory reading of forums has mentioned that doesn’t work yet. 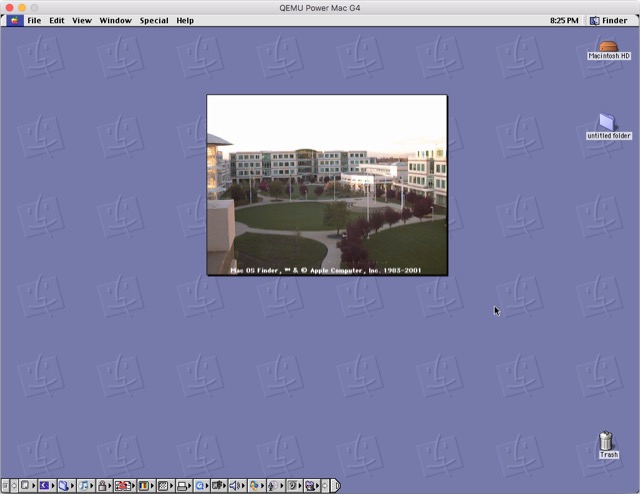 To support 256 colours you will need to add a bios driver. See the EMaculation forums for instructions; it involves replacing a file in the pc-bios directory with an older version that still supports 256 colours.

I removed the extra arguments from configure as by default it will enable everything it can. make should use -j instead of -J. Using USB devices for mouse/keyboard improves mouse performance, but it still is a bit sluggish compared to the host machine. I found a way to get 256 colours working; see that section for a guide.